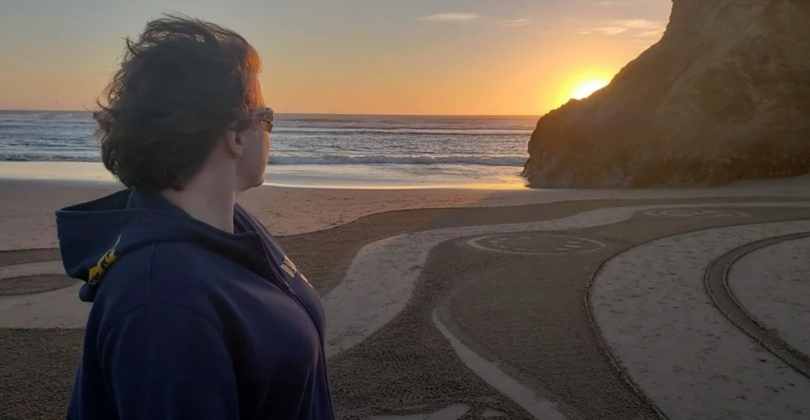 “I think I have to turn around.”

This is what I had said, to my then boyfriend, who was walking the trail ahead of me with his friend. We had spontaneously decided to pile into our cars and head out the road to a trailhead we were curious about exploring further. My boyfriend and I had come out several months prior but had only managed to go a mile or so before we had to turn back due to fading light. Today was going to be different. We were heading out in the early afternoon, had brought snacks and even a flashlight or two. Just in case. We were nowhere near die hard “hikers”, but we thought it would be great to enjoy the last of the summer heat before the cold took over the hills and farmlands. Fate would have other plans.

What seemed like mere yards into the hike my body was at its breaking point. Despite my most recent exercise and diet attempts, I had gained even more weight since last on this trail and my 355-pound frame was straining to keep up. Red faced, I blinked through the sweat that was finding its way through my eyebrows at the blurry figures ahead of me. So. Far. Ahead. My back and feet ached in ways that it would be impossible to explain, especially this soon into the trip. Yet, there it was and there I was; pain lancing through me with every labored breath. There was no way I was going to be able to keep up with them, let alone endure the ten-mile hike that they had decided upon.

This was one of many times that my desire for food and comfort wrestled with the desire to explore and chase life. Whether it was giving up most grocery shopping in leu of fast food because it hurt for me to walk through the large market or signing up for gym memberships only to never go. Whether it was going to Overeaters Anonymous meetings and retreats only to come home and seek comfort in my “nest” of food while watching Biggest Loser on TV from the couch. It was becoming involved in online weight loss support groups while simultaneously ballooning up to close to 400 pounds; my spirit was in direct conflict with my addition. My addiction won.

The years rippled past me, taking more and more. My relationship ended, I changed jobs, houses, cities, and eventually devised a plan to take back control of my life. I was going to cash out my measly 401K and undergo weight loss surgery. The path from that decision to now has been an adventure all its own. One that I would repeat without hesitation.

Breaking free from my prison-like “nest” into the world of the living has been an experience I am grateful for everyday. I've experienced many adventures that I never thought possible in my old life. I shop at the grocery store again. To slowly build up strength, I took my dog to the dog park to watch her run. Then, I worked towards walking.

I began exploring further and further outside of my comfort zone. With the weight coming off I was able to go out for longer periods of time, gradually building confidence and endurance. The benefits are undeniable. I’ve been able to discover and enjoy a multitude of beaches, rejoin roller derby, star in a couple of plays, explore beautiful trailheads along the Oregon coastline, forge into the woods in search of hidden swimming spots, take a few beginner swing dance lessons and begin exploring the concept of jogging. All of which were made possible because I took a step in a different direction.

Now when I walk, I don’t walk through blurry tears. I don’t look out to those who are too far ahead of me, I look out to the beautiful horizon before me and make my own way. I look out into forever. And I keep walking.